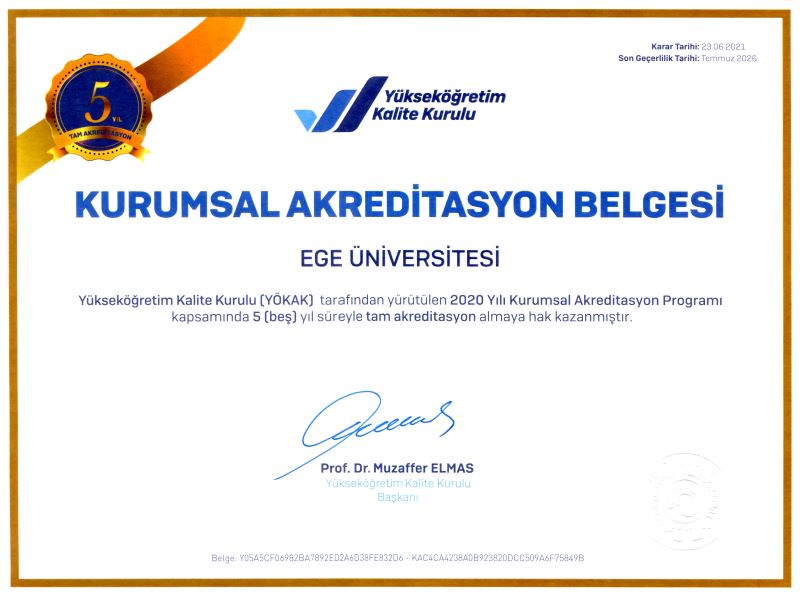 Founded within the body of the Rectorship of Ege University, the European Languages and Cultures Research and Application Centre (ADIKAM) focuses on analyzing the language, literature and cultures of various European countries within the field of academic research. In terms of intellectual disciplines, it is firmly rooted in the humanities with strong literary and language components. The inclusion of the words language in the Center’s name signals our commitment to “translingual and transcultural competency, i.e., the ability to work with and across the multilingual reality that is Europe. The aims of the centre are: to develop communication, to encourage mutual research and studies, to collaborate through translation, and to arrange scientific and cultural meetings. ADIKAM’s main scope of applications are centered on:
* Conducting basic and applied research on European languages and cultures and forming national and international collaborations,
* Encouraging scientific projects related to culture and language,
* Collaborating with Ministries such as the Ministries of National Education, Tourism and Culture,
* Organising national and international scientific gatherings such as panels, seminars, symposiums, conferences and congresses related to the research fields of languages and cultures.
The Center plays an important role in evolving our comprehension of the complex social transformations of European languages and cultures. Research and seminars at the Center consistently address larger themes of regional integration and globalization focusing on cultural diversity.

ADIKAM, founded in 1997, emphasized the necessity of language variety through conferences and panels held in various platforms in Izmir and the Aegean Region under the guidance of Gertrude Durusoy (Director), Günseli Sönmez Ýþçi, Lütfiye Oktar, Semira Kortantamer and Neþe Özgen. In its early years the centre focused on transculturation rather than merely introducing different languages in international meetings. The Lamartine Symposium held in Tire-Ýzmir in 2004 was such a platform on which the issue of uniting cultures was discussed. In 2004, the centre continued working under Gertrude Durusoy with Günseli Sönmez Ýþçi, Ersin Doðer, Semira Kortantamer and Neþe Özgen as Board Members. ADIKAM continued to thrive and generate various platforms of discussion on literary translations, languages and cultures well into 2008.

In January 2014, with its newly appointed Board Members consisting of Dilek Direnç (Director), Rezzan Silkü, Nergis Pamukoðlu Daþ, Atilla Silkü, and Yücel Aksan, along with Züleyha Çetiner Öktem as Events Coordinator, the centre has organised a CineForum and a series of lectures on various subjects, concluding the year with its largest academic gathering, the Literature and Cultural Studies Conference entitled "Myth-Making Across Boundaries" which is intended to be the first of a series.